A native of Northampton, Massachusetts, Rev. John J. Brennan, otherwise known as "Fr. Jack," was born on July 27, 1951. His parents were the late James and Hazel (Rogers) Brennan. Fr. Jack has two brothers; James Edward, formerly of California, now residing in Northampton, and Richard Francis, of Orlando Florida. Fr. Jack's sister Mary Catherine died in 2013. Fr. Jack spent his formative years in the Florence section of Northampton and was educated at the former Annunciation School, the parish elementary school, and is a graduate of the former St. Michael's High School of Northampton graduating in June of 1969.

"Growing up in Florence was an ideal time to be a kid. The early of my youth summers were spent at Look Park taking advantage of the enormous swimming pool that the city maintained. My mother would always send us outside to connect with friends who were more than likely to be found at the school yard around the corner from where I lived. There was always something to do, whether it was a pick-up game of a ball game, riding our bikes, or taking a trip to Moriarty's Drug Store to feast on a Boston Nut Sundae (only 15 cents in those days). I was active in the local Boy Scout Troop, Troop 103 under the careful guidance of Scoutmaster George McDonald. I achieved the rank of Eagle Scout while a member of the Boy Scout Troop and In later years I began working during the summer at Camp Chesterfield, the summer camp operated and supervised by the Great Trails Boy Scout Council. I was a member of the camp staff for many years beginning from age 13 until I graduated from college in 1973."

"After High School I attended and graduated from St. Michael's College in Winooski Park, Vermont. It's close proximity to the City of Burlington, Lake Champlain, the numerous ski areas and the other colleges and universities in the greater Burlington area provided more than ample opportunities for cultural, academic and recreational experiences. During my junior year I participated in the Junior Year abroad program at the Rome Campus of Loyola University. The Campus was located atop Monte Mario, one of the seven hills of Rome, Italy in close proximity to the Vatican. Upon graduation from St. Michael's in 1973, I worked for the following year at the Newman Center on the campus of the University of Vermont. This was a year of discernment as I had been contemplating entering the priesthood during the latter part of my college years."

"In the fall of 1974, October 3, 1974 to be exact, I entered the seminary on behalf of the Diocese of Springfield. Once again I found myself in Europe in Louvain, Belgium at the University of Louvain and the American College. The American College was the residence in which 125 seminarians were living while we followed our course of instruction at the Theology Faculty. The European style of education was a clear departure from the American education system. The professors delivered the lectures all the while we students took copious notes. Questions or comments directed to the professor had to wait until after class time as one never interrupted the flow of the presentation. There were no research papers to write, nor were there quizzes or tests during the bulk of the year; all exams were given in a two week block in June. It took some time to make the initial adjustment as the exams were administered orally, one-on-one with the individual professors. It was nerve wracking to say the least!"

"Upon my return to the United States, I was ordained by the late Bishop Joseph F. Maguire on September 9, 1978 at St. Michael's Cathedral in Springfield, MA. I celebrated my First Mass at Annunciation Church the next day on September 10, 1978. (Coincidentally, my ordination just happened to be during the 100th anniversary celebration of the parish). In October of 1978, I started my first pastoral assignment at Holy Name in Springfield under the watchful eye of the pastor, Fr. John D. McNamara, a.k.a. known as "Big Mac." I ministered in that parish until the fall of 1980, when I was transferred to St. Joseph's Parish in Pittsfield. In 1986 I moved back to the valley to serve at St. Michael's Parish in East Longmeadow for the next seven years. In 1993, I became the pastor of not one, but two parishes in the City of Westfield, St. Peter's and St. Casimir's respectively. In July of 202, I became the pastor of St. John the Evangelist in Agawam, a position I held until January of 2013 at which time I took a six month sabbatical. In July of 2013 I moved to the beautiful town of Monson to be the pastor of St. Patrick's in Monson and also Pastor in the great town of Brimfield at St. Christopher's."

"It is hard to imagine that all this time has passed, but here I am many years later. Like everyone else I have had my share of successes and failures, but each success I owe to the careful upbringing I received from my parents Jim and Hazel Brennan, and every failure has been an opportunity for learning and improvement. I greet each day as it comes, with all of its expected and unexpected turns, for that is all we have, these 24 hours; let us live it to the full!"

"Among my hobbies and interests are reading, traveling, the beach in the summer and the mountains in winter. Skiing, golf and cycling round out my recreational interests. I enjoy, concerts, movies and the theater and an occasional trip to Boston or New York City to take in the offerings in both locations. Ralph Waldo Emerson once wrote: " Go confidently in the direction or your dreams! Live the Life you've imagined." This is the hallmark of my life and I am glad to be able to share it with you!"

As you can see now, Pastor, Fr. John J. Brennan is a great guy
So Come To Church and see for yourself 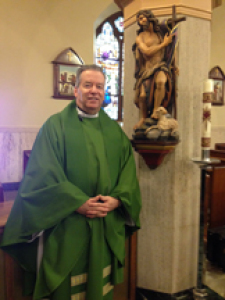